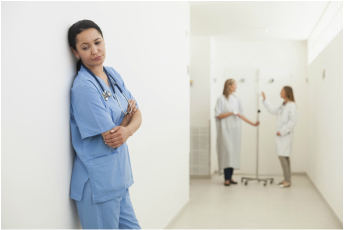 Bullying in nursing includes. Usually the incidents of bullying seem too trivial to complain. Nevertheless, it is these small incidents that the bully will use to undermine the target and eventually destroy their self confidence. Often in Health Institutes, the person doing the bullying is not given consequences and often get away with their behaviour.  People that bully are often protected by the person above them.

Bullies work at cultivating friendships with the person in the position above them. This is aimed at gaining their favour. The level above now becomes the protector of the bully. They promote and protect them from criticism and blame.

The bully alternates their behaviour from being friendly to abusive. The change in behaviour creates confusion in the target as they doubt their own perception of the abuse. Uses surprise and unpredictable behaviour

The following are some examples of Bullying- directed at a target (repeated behaviours).
Changes plans and meetings to catch the target off guard.

The target is not given any warning about planned meetings with a supervisor (or a witness) when complaints are laid. They don’t have time to prepare for the meeting.

Lies and dishonesty- Will twist the truth in a convincing way. Lies serve to blame the target and to absolve themselves from blame.

Silent treatment and isolation of the target

The bully will isolate the target, and encourage others to do the same.  The target will be excluded from information and workplace activities.  Withholding information or supplying incorrect information will increase the likelihood of mistakes.

If the target tries to talk to the bully, they are usually unavailable, or deny there is a problem. They may use hand gestures to prevent conversation and walk away.

The bully may greet everyone pleasantly but ignore the target in an underhand way.

They will refuse to acknowledge good work and demean accomplishments. If praise is given it is used as a form of manipulation.  They take credit themselves, and will sometimes plagiarise another person’s work and present it as their own.

Will conveniently forget to tell the target about changes in meeting times, roster shifts or important information. If they are confronted they will lie and state they did tell them.

The target may receive threatening letters about disciplinary actions or meetings, worded in a way to instil fear. The messages are often sent prior to the target’s holidays or before their days off.

Criticises and belittles the target using put downs aimed at humiliation. Rolls their eyes when the target speaks or uses body language to indicate contempt.

Recruits, charms to cultivate friendships with people in positions higher than themselves.  Recruits others to assist them with the bullying.

Instigates intrusive monitoring or supervision which causes the target to feel anxious and increases the likelihood of them making more mistakes.

If in a position of power the bully will control by denying annual leave, sickness leave, compassionate or study leave.

Blocks promotions or prevents the target from acting up in higher positions to block career progression.

Denies necessary training to perform the job adequately. Withholds important information which is a necessary requirement to perform efficiently.

Gives the target a poor performance appraisal but is unable to give examples to support the allegations of incompetence.
(Reference: Uncomplicating Life Simply).

Note also:
If a staff member has isolated aggressive outbursts, this may not always be bullying, as bullying includes behaviours that are repeated towards a target. Aggression behaviour is not always bullying.